A man has been sentenced to three years in prison after being found in possession of Class A drugs in Hemel Hempstead.

He had previously pleaded guilty to possession of drugs with intent to supply, dangerous driving and driving whilst disqualified.

The court had heard that on November 22, 2018, officers received information regarding a black Audi A3.

The vehicle was known to be involved in drug dealing in the Hemel Hempstead area and had failed to stop for police the previous day.

After an area search, the officers found the car in a small car park in Maylands Avenue, parked directly in front of a safety bollard.

They manoeuvred their unmarked vehicle in front of the Audi to block it in.

When officers approached the driver’s door and found it locked, Walter attempted to get away by driving forwards into the unmarked police car, then backwards into the bollard.

Officers used their metal batons and smashed the Audi’s windows to disable the vehicle and detain Walter.

He was then searched and found to be in possession of over £1,000 worth of cannabis, cocaine and heroin, as well as £273 in cash. 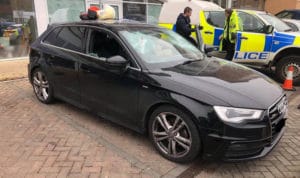 They also found and seized three mobile phones, as well as a handwritten list of mobile numbers.

Detective constable Stephen Cahill, who investigated the case, said: “I am pleased that a drug offender is behind bars and a large amount of Class A drugs has been prevented from reaching the streets.

“We are always working proactively to gain intelligence on criminality involving drugs and I would urge any members of the public who suspect there is drugs activity in their local area to please report it to us. Any information you provide could be the missing jigsaw piece which will lead us to catching an offender.”

You can report information about drugs through the non-emergency number 101 or online at herts.police.uk/Report

Alternatively, you can stay 100 per cent anonymous by contacting the independent charity Crimestoppers on 0800 555 111 or via their untraceable online form at crimestoppers-uk.org