A care home was praised by health officials recently and a care worker won an award.

Chorleywood Beaumont Care Home was given a ‘Good’ rating by the Care Quality Commission (CQC) and resident nurse, Diana Nica was crowned Registered Nurse of the year for Barchester’s South Division in the Barchester Care Awards 2019. 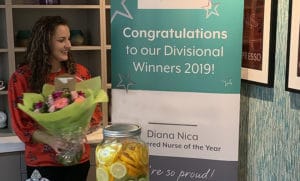 The CQC inspected the home on March 8 and was rated ‘Good’ in all 5 areas; Safe, Effective, Caring, Responsive and Well-Led.

The report, published in June, stated that there were, “People and their relatives said that staff were kind and caring. Staff knew people well and their likes and dislikes. People were treated with dignity and respect. People received compassionate support at the end of their lives”.

At the regional awards ceremony, Diana was named top in the region out of 1,900 nominations received from homes across the UK.

As the winner for South Division, Diana has automatically gone through to the national Barchester Care Awards finals, where she will be interviewed by the judges for the last round of judging.

In October Diana will join the other finalists from across the UK at a special awards luncheon to celebrate their achievements and discover if they have won the national awarding title.

Diana said: “I wasn’t expecting to be shortlisted but I am so pleased, and proud. We don’t work in care for the accolades but it’s wonderful to be recognised by my team and peers, it is nothing short of an honour.”