A husband killed his wife and daughter before dying in a fire at their home in Hemel Hempstead, Herts post mortem examinations have revealed.

Gary Walker, 57, stabbed his wife Caroline, 50, and daughter Katie, 24, before setting the fire to the home in Stuart’s Close last Sunday (March 29).

Emergency services attended at around 12.30pm after a neighbour saw smoke coming from the bathroom.

“A murder investigation was launched by the Bedfordshire, Cambridgeshire and Hertfordshire Major Crime Unit however no one else is being sought in connection with the deaths.”

Detective inspector Iain MacPherson, from the Beds, Cambs and Hertfordshire Major Crime Unit, said: “I fully understand that this tragic incident will have had an impact on the local community. I would like to once again reassure people that this was an isolated incident and we are not looking for anyone else in connection to it.

“The family is being supported by specially-trained officers and I would ask that their privacy is respected at this very difficult time.

“In due course a file will be passed to the coroner.” 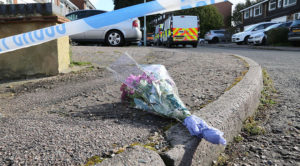 Neighbours said the family had lived at the address for 30 years. Gary worked as a draughtsman, Caroline, 50, at a supermarket. Their daughter Katie, 24, worked with animals. The couple had another son and daughter.

One neighbour said: “They were a lovely family. They had been here for about 30 years. It is a terrible tragedy. We don’t know what happened.”