A Radlett musician who has hit seven million streams on Spotify said she could never have imagined reaching such heights in her career.

Jahnavi Harrison, a lifelong Radlett resident who recently moved to America, was thrilled to see her joint EP with WILLOW (Willow Smith), R I S E, hit such a remarkable milestone despite having only been released six months ago.

“It’s pretty surreal,” Jahnavi said. “I’m grateful to everyone who is excited about this music and continues to find peace and grounding in playing it.”

The EP, which consists of six soothing tracks, aims to create an uplifting, meditative space for the listener. While WILLOW, who is Will Smith’s daughter and a musical star in her own right, offers plenty with her soulful vocals, Jahnavi’s spiritual influence is perhaps the key component throughout the EP. 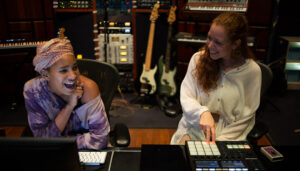 R I S E has helped propel mantra meditation music, known as kirtan, into the mainstream and Jahnavi couldn’t be happier about it.

She explained: “in the 90s, when I was a child and teenager attending school at the nearby Bhaktivedanta Manor, I knew that things like yoga and meditation – part of my everyday life – were hardly known in the mainstream, let alone the music of yoga, called ‘kirtan’. I never could have imagined how things would change.

“Over the last 10-15 years, increasing openness toward practices which support wellbeing of the mind, body and spirit, like yoga and ‘mantra music’ have allowed what I do to reach a wider audience. I’ve travelled all over the world sharing it.

“Right before the pandemic, we did large concerts of 600-900 people in Moscow, London, New York and LA.

“It’s a beautiful thing and though there have been no concerts in the last year, I think people are listening more than ever.

“I think that as the decades roll by, we are finding that much about the modern lifestyle neglects the things we need to feel mentally, physically, emotionally and spiritually grounded.

“Mantra music is positive, uplifting, healing and most importantly connects us to a sacred space within. I think we all need that, which is why such a wide variety of people are listening now.”

While Jahnavi is now sharing her music across the world, this village in particular has a special place in Jahnavi’s heart – her parents, who still live here, say she is “A Radlett girl through-and-through”.

Jahnavi added: “I try to come back to Radlett as often as I can, as I just love it so much. Particularly all the little green spots, like the maze of footpaths through the fields, and the park.

“I’ve spent my whole life until recently in Radlett, so it’s really in my veins and definitely in my heart! I spent the first five months of the pandemic at home with my family and that was a great and unexpected blessing.”

Radlett also has a place in Jahnavi’s repertoire – her first and only full-length album, Like a River to the Sea, was recorded in a home studio at Battlers Green Farm in 2015.

The spiritual singer is keen to continue creating and releasing new tracks this year, after her two releases earlier in the year – GOVINDA! and Divine Maha Mantra – were well-received by fans.

And there’s plenty of those now. Jahnavi averages more than 457,000 monthly listeners on Spotify – a feat which her collaboration with WILLOW undoubtedly helped her reach.

Explaining how the pair met, Jahnavi said: “She attended a mantra music gathering I was leading in LA. We got talking afterwards and straight away felt an ‘old friends’ vibe, which surprised us both I think.

“We bonded over a shared belief in the power of mantra music. Our friendship has been creatively challenging and inspiring and we are both so grateful for the impact of the work we’ve done together so far. We’re planning for more in future.”

Concluding her interview with RadlettNews, Jahnavi added: “I also wanted to say thank you to everyone in Radlett – particularly the community of residents of Rendlesham Avenue, for staying strong over this past year and taking care of each other.”