> Niks Natter > Never give up on your dreams, never believe you are too old, too slow, too shackled… My Wembley Way

Never give up on your dreams, never believe you are too old, too slow, too shackled… My Wembley Way

October 13th 1976 is a date that’s etched onto my memory forever.

It was my first taste of Wembley, a World Cup qualifier no less, under the floodlights.

Okay, so the fact England’s opponents were Finland doesn’t decorate the event in some of the gloss of footballing fantasy than might a match against Brazil, Italy or Germany; but nevertheless, my first time in the shadow of the Twin Towers is an experience I will never forget.

The damp, fresh autumnal air was again scattering leaves around north-west London, and this lifelong footy aficionado again found himself sauntering up Wembley Way… yet this time clutching a bootbag.

That’s right – what Nik Allen the young Everton scarf-waving fan couldn’t achieve, his older, slightly wider adult self was about to – playing on the hallowed turf.

My Club Wembley membership had left me the lucky winner of a raffle – the prize, to run out alongside my son. It was going to be a lifetime’s ambition fulfilled.

And I can safely say the experience didn’t disappoint – from start to finish I was in dreamland.

While we were all England for the day, I even had a sense that my club was there with me in spirit – on our initial stroll out onto the pitch, my mobile phone went off.

My ringtone is the Z-Cars theme, famously played at the start of every home game by Everton. That it should sound as I was walking out was, for me, the start of the magic… 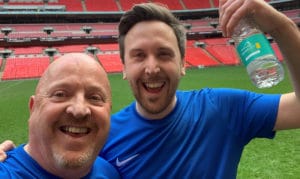 And from there it just continued.

From our team being managed by England legend John Barnes, to the dressing room excitement; from threading a pass through the eye of a needle (at least that’s how I’ve chosen to remember it) for one of our goals, to climbing the 107 steps to collect winners’ medals – I was that excited, awestruck, humble kid all over again. 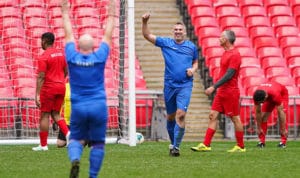 So what’s the point of all this? Well, it’s two-fold. Firstly, I’ve been telling anyone and everyone about my day out at the home of football, and there’s no reason why you should escape that!

More importantly, it’s to remind people that while some things change – Wembley stadium has been demolished and rebuilt in the time since I first went, the towers are gone, and the game itself is so radically different to how it was in the 1970s – our ambition to succeed stays the same.

Never give up on your dreams, never believe you are too old, too slow, too shackled.

The plans you conceived in the past and the optimism you had are as real today as they always were.

We can all get tarnished and greyed by the repetitiveness of everyday life, but one day, the fuelling of those fires will warm you in a way you perhaps thought would never happen.