A designer made her stamp at London Fashion Week recently in a bid to change the stereotype of what models should look like.

April Banbury, from Kings Langley, chose a diverse range of models to catwalk her work, to make a statement that everyone is beautiful in their own natural form.

The 30-year-old wants to inspire people and make sure everyone feels confident in their own skin.

She said: “I chose the models because they represented diversity. We are all beautiful beings and we should be embracing what is actually ‘perfect’ is our body’s in their natural form.

“Different skin types, stretch marks, tall or short, slim or curvy – I want to send out a message to the industry that everyone should embrace it and that the model stereotype needs to change.”

Out of a range of models, April chose a model with Down’s Syndrome, a plus-sized model, and women of different races and backgrounds. 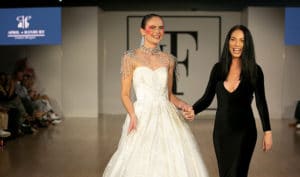 The fashioner said the current stereotype messes with people’s mental health, after admitting it has left her obsessing over what the media portrays as ‘perfect’.

She said: “I think it’s important to change the ‘model stereotype’ for men and women’s mental health. I myself in the past found myself obsessing over what the media was making us believe was ‘perfect’ when it’s not.

“Making people feel body confident is exactly the message I want to send out. By bringing diversity to the fashion/modelling industry and embracing this. We’re in 2019, it’s about time the ‘model stereotype changed’.

“A few were in disbelief that I’d selected them, and it made feel very empathetic because why should they not have been given an opportunity like this? I am going to continue working with models of diversity through Fashion Finest and for fashion shows and campaigns.”

The Hertfordshire girl had such a positive response from her show and has said the support has been unbelievable.

Alongside her successful career in fashion, April is also set to compete for the title of Ms Great Britain in February next year which she said has always been a dream of hers.

She commented: “The competition marks the 75th anniversary of Miss Great Britain and the first ever Ms Great Britain. It’s such an honour to be a part of such a prestigious pageant.

“It will be an exciting journey where I plan on being the best role model and advocate for Great Britain that I can be while celebrating diversity.”

The finals are Friday 21st February in Leicester. Tickets to the show can be bought at eventbrite.co.uk/e/miss-great-britain-grand-final-tickets