NATIONAL PRIDE: Garston women ‘overwhelmed’ after being voted among the UK’s very best

The organisers of a women’s running club in Watford have been named among the UK’s women of the year for 2019.

Aislinn Quigley and Shelley Ardel, both from Garston, run BootyFit which was set up with the aim of making women feel better about themselves.

The fitness duo set up the club in September 2018 and had six people turn up to their first session, but now have a staggering 300 members running in multiple sessions throughout the week.

Aislinn said her and Shelley are “overwhelmed” with being voted as some of The Women of the Year. 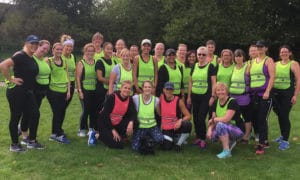 She said: “We are a bit overwhelmed, but it is amazing news. We are so happy with it. When they come to our sessions and get a feel of what the group is about and make friends, they say we change their lives – but receiving this award has concreted that fact.”

The Women of the Year applies to every woman in the UK. 1,000 women get nominated which gets whittled down to 400 winners like Aislinn and Shelley.

Shelley said: “To be nominated and selected as one of the winners for Women of the Year was a massively proud moment and I felt very privileged.”

After coming up with the idea of creating BootyFit, the duo wanted to make it as inclusive as possible and have focussed on bringing a community vibe into every session.

Aislinn said: “The club is very inclusive. It is like a tight knit community. We have two instructors on each run, one at the back and one leading at the front.

“Everyone supports each other at every session – it is amazing to see. When some people start, they lack confidence, but once their confidence improves, some of them volunteer to run the sessions, so we paid for 12 of them to get qualified so they can lead sessions in the future.”

Some members of the group have credited the sessions, saying they have been the main reason why their mental health has improved and why some of them have lost up to 50 pounds.

Aislinn and Shelley run sessions from Watford (meet at the dome roundabout) at various times, mornings and evenings, on Mondays, Tuesdays, Wednesdays, Thursdays and Saturdays.

More information can be found on their Facebook page; BootyFitexcercise.