A hero taxi driver has been commended by a judge for saving a woman’s life after putting himself between a knifeman and the woman he was attacking.

Anwar Hussen, 43, was stabbed himself as he stepped in to protect the woman from Khaled Ahmed in the early hours of the morning in Watford on July 3, 2019.

Khaled Ahmed (pictured), a 39-year-old illegal immigrant from Bangladesh, has been jailed for a total of 18 years after he caused wounds to the woman and her nephew.

The nephew of the woman suffered serious injuries to his right hand which are so bad he can no longer work as a chef, St Albans Crown Court heard.

Ahmed, of Grenadier Close, St Albans appeared for sentence via a video link from Bedford prison today (February 4) having pleaded guilty to three charges of wounding with intent and one of possessing a knife.

The woman, her nephew and Ahmed met in the early hours of the morning of the attack at the Kasturi restaurant in Vicarage Road.

Ahmed stabbed the woman a total of nine times both outside and inside the restaurant. 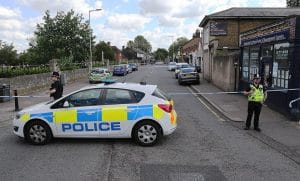 Mr Hussen did not know anyone involved in the altercation, but still got out of his taxi and caught up with them back in the restaurant, where Ahmed stabbed her again.

Mr Weidmann said: “Mr Hussen got between them and partially tripped. He was on one knee. He put his palms onto the defendant’s middle to prevent further attack and was then stabbed once on the upper left side of the torso.”

In a victim personal statement, the woman said: “I thought this was my end and I was going to die there. His face was dark, and his eyes were bulging out. I genuinely feared for my life. I did not see the knife.

“If it were not for the actions of this stranger who got in Khaled’s way and allowed me to flee and my nephew, I believe I would have been killed. I owe them my life to this day.”

Mr Hussen, who was awarded £750 from the court, said: “I really believe it was the defendant’s intention to kill the female.  I did not consider my safety, only that I must stop this man. Only with hindsight I realise how terrifying it was.”

Referring to Mr Hussen, Judge Michael Kay said: “He demonstrated extreme bravery in stepping in between the defendant and the woman victim. It was circumstances where he could have been killed. He acted entirely out of altruism.

“He says he believed the defendant had murderous intent. He heard her cry: ‘He is going to kill me. He felt it his duty to protect her although he did not know her. He felt he had to stop the man. Only after this event did he realise he had been stabbed.”