A fundraising page set up in memory of a Watford girl surpassed £18,000 recently with all funds going towards research for a rare cancer.

Jessica Macqueen was nine years old when she tragically lost her battle with cancer in October last year – less than five months after her diagnosis of rhabdomyosarcoma.

Following the devastating news, the page was set up because something had to be done to stop children, like Jessica, becoming a victim to this rare form of cancer.

Jessica’s mum, Laura, is heartbroken and despite it being hard to imagine life without her, she is dedicated to raising as much money as possible in her daughter’s memory.

She said: “She was my world and we have been left devastated. It’s hard to imagine life without her. We miss her so much and she has left such a huge hole in our family.

“Jess was amazing. Excellent in school, loved her pony, jujitsu and was a fit and healthy child. We have constant memories. Me and her did everything together – she was just such a lovely person. 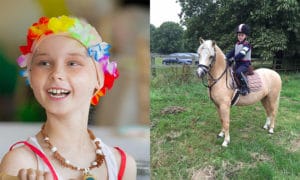 “I saw the impact chemotherapy had on Jess and it made it clear there needs to be more research and more fundraising to find treatment for kids which doesn’t destroy their bodies or their future.”

All the money will be donated to Alice’s Ark, a charity set up in memory of Alice Scarlett Wakeling, a seven-year-old who died a week before Jess from the same cancer.

Parents from Holy Rood School, the primary school which Jess went to, took part in a 10k race and raised an amazing £10,000 for Alice’s Ark.