In one moment, when you least expect it, your life can change for the best or worst, but how you deal with that change is the key, says 27-year-old Henry Fraser.

At 17, Henry, who used to live in Kings Langley, had his whole life ahead of him but in split second, everything changed when he was on holiday and dived into the sea off the beach and banged his head on the seabed – paralysing him from the shoulders down.

After conquering unimaginable difficulty to embrace life and a new way of living, Henry now holds talks to inspire others and focusses on his passion – art by using his mouth. 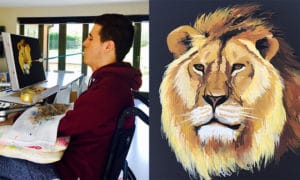 “I always loved art when I was a kid. Obviously, I couldn’t use my hands after my accident, so I downloaded a very basic app on my iPad and used a pencil with my mouth and now I use a paintbrush. Art has given me happiness,” said Henry.

With Henry, who now lives in Chipperfield relishing his new life and following his passion for art, he has had famous faces compliment his work including JK Rowling and Jonny Wilkinson.

After his accident in Portugal in 2009, Henry had a number of emergency surgeries and was discharged from hospital in February 2010 which was a very dark time in his life.

He explained: “I was put in a wheelchair for the first time and was taken outside – it was lovely. But on my way back, I saw my reflection and it broke me. I had lost four stone, had an arm and head rest and it shocked me.

“I had a complete breakdown, but as I began to think about it. I thought, I can’t change it, so I changed my outlook.”

Henry now lives by the motto of always look at what you can do and don’t dwell on what you can’t do.

Come March 2020, Henry will have had his second book about his life published.