At a time when she was needed most as a mother and a grandmother, a woman went the extra mile for not just her family, but people across the world.

Adele Marks (left) innovated a portable, lightweight fan to help her daughter, Jodi (right) who was struggling with hot flushes, a side effect of her chemotherapy months after giving birth to her son.

Alongside bringing up her grandson Charlie, Adele, whose business is based in Stanmore, launched FanU to sooth Jodi’s and others suffering.

Mainly inspired by her daughter’s battle with breast cancer, Adele’s determined, positive and pro-active mindset led to her launching the product which is now being sold across the world.

Speaking to StanmoreNews she said: “When I saw my daughter going through chemo and how much she was struggling with hot flushes, I thought I had to do something so I innovated the product and to see how much it helped her was amazing.

“It meant that she could hold it close to her body and it went from there really. The feedback we have had from people going through chemotherapy and the menopause has been so positive which makes it so much better.”

Aimed at helping people with cancer and women, like Adele going through the menopause, the fashionable fan can be used for anyone and for any reason. 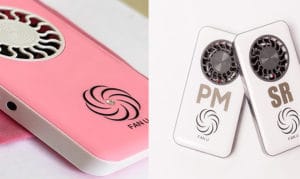 Adele said she was blown away by feedback received from people who were going through cancer and the side effects of chemotherapy who were using the product.

Launching the product for Adele was all about helping people and to help even more, 10 per cent of profits are being donated to Breast Cancer Now, a charity which helped Jodi when she was fighting cancer.

She said: “The whole thing was about helping people and being corporate partners with Breast Cancer Now and Breast Cancer Care has allowed us to help even more people.

“I do believe that my daughter’s life was saved by the research they are doing, and I want to do my bit, and give everyone the same opportunity my daughter had.”

FanU won ‘Most Innovative Fundraising Award’ at the 2018 Breast Cancer Now Awards and have had their product endorsed by a number of celebrities, like Simon Cowell and former Tottenham Hotspurs captain Ledley King.

Jodi, who is now doing really well, and her mum wanted to raise awareness to women about the realism of cancer and how it affects people.

To read more on Jodi’s story or to buy a FanU product, click here.