Dean Russell, MP for Watford, has put his painting skills to good use recently to generate some much-needed funds for Raise, a charity which supports staff at West Hertfordshire Hospitals.

The MP, who has also been volunteering at Watford General Hospital to support the NHS, painted a picture of 100-year-old Colonel Tom Moore who raised over a staggering £30million himself by walking 100 lengths in his back garden. 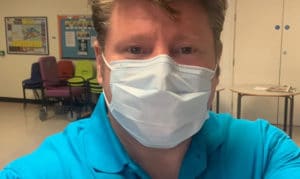 The MP’s artwork, along with another which was drawn by artist Mike Dawson, was auctioned off by the charity and raised over £1,200.

Speaking to WatfordNews, Dean Russell MP said: “I’ve been painting for a number of years now and it’s something I’ve loved doing. It was done over the bank holiday weekend in April and now the money raised can support a charity that does amazing work for staff at the NHS.

“They are a dedicated charitable arm of West Herts Hospitals NHS Trust and ensure that staff get food and general support.

“In times of crisis, the public look to people like Colonel Tom Moore for hope. He is 100-years-old and has never given up in his life, so it’s been incredibly good to look to someone like him who has been able to fill us all with hope.”

Dean Russell MP has taken part in the volunteering scheme at Watford General Hospital and has been doing three-hour shifts undertaking tasks such as getting water to staff rooms, taking notes to the relevant areas and even cleaning Zimmer frames.

He continued: “The volunteers are really helping out in the background. They are just incredible people from all different ages and backgrounds and are trying to support the NHS staff in whatever way possible.

“We are kept safe at all times but are genuinely put to work. My greatest request is for everyone to stay at home, protect the NHS and save lives but if they can also help by volunteering then it really is something fantastic to be able to do.

“It’s been an absolute privilege to be Watford’s MP during this time and there’s never a morning where I don’t wake up thinking how lucky I am to be able to help people in the community.”