> Uncategorized > CLOSING DOORS: Petition launched to help save small businesses on the Meriden in Garston

CLOSING DOORS: Petition launched to help save small businesses on the Meriden in Garston

Shop owners in the Gossamers, Garston,  have been told to close their premises temporarily as part of the Meriden Regeneration project and they fear their businesses won’t survive.

Watford Community Housing had initially promised the business owners they could move into the new premises at the same time as closing their old ones –  just like the Co-Op will be doing – but this is not the case anymore.

They have been given time until April 30 to remove all equipment and stock and have been told it’s going to be several months before the newly built shops will be ready in York Way.

The regeneration project in The Meriden, Garston was approved by Watford Borough Council in October 2015 despite protests by local residents. 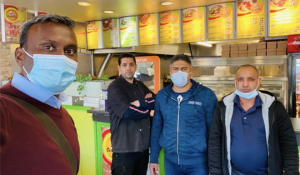 Speaking to GarstonNews he said: “ These businesses have been an anchor of the community for decades.

“All I want is for them to be able to transition into the new building much like the Co-Op with minimal disruption and continue serving the local community for years to come.”

A statement on the online petition page, reads: “They are being forced to close, but the buildings they occupy will not be demolished for months.

“These businesses do not have the financial capability to absorb more huge losses after those incurred during lockdown and the majority now face the threat of being permanently closed.

“Permanent closure will not only affect the owners of these shops, their employees, and the local economy, but it will also adversely impact the local community who have relied on their services for decades.”

GarstonNews spoke to some of the shop owners affected.

Kazem Ranjbar, chef at Chiqizza, said: “It’s very bad for us, they’re forcing us to close the shop. There are five, six people here that will be losing their jobs. We don’t know if it will actually be a wait of three, four months before the new site is available.

“We won’t survive if we close for so long. If they force us to close they should give us a place to trade temporarily straight away, I wish for them to come and see for themselves our struggle. Come here and see how difficult it is for us having to shut everything.”

Hazell Tennent, speaking on behalf of the Garston Coffee Shop said: “First it was COVID-19 and now it’s this, business wise they’re losing drastically. The buildings aren’t ready yet, let them have an extension, stay where they are and let them serve the community. The Co-Op is due to open I think on May 7 or 8, but that still doesn’t help the elderly.

“Look at the older generation, they have been coming to Garston Coffee Shop for decades. There’s one resident who started going to these shops when he was five, he is 65 now. Everybody in the Meriden knows everybody. The elderly people and the disabled will be really affected by this as they can’t walk far and they rely on these shops to be there.

“We have only recently started this petition online and we are doing paper petitions as well, time is against us and we need to do something about this.”

Nilesh Patel postmaster at Meriden post office added: “They gave us a very short notice and told us to vacant the premises. The post office is a community service and there are a lot of elderly people that rely on our service and this is an inconvenience for them too.

“At the beginning of the project we were told we would have a place to move to when we close and this is not happening. My appeal to Watford Community Housing is ‘let us stay where we are and get the buildings ready as quickly as possible and we move there whenever the new shops are ready.’

“It’s affecting our business a lot, three months closure is a long time, we won’t be able to pay our staff if we are not running our business, it’s really hard for us and the community.”

We got in touch with Watford Community Housing to hear their side. A spokesperson’s statement read:

“Unfortunately, owing to delays in the provision of information about their basic requirements and the execution of necessary legal arrangements, along with additional requests made by some of the retailers, it will not be possible for them to move over to the new site immediately.

“While this is the responsibility of the retailers, we are continuing to work closely with them to support them in moving to the new site as soon as possible.”

The spokesperson clarified that the comments about the timing of the demolition of the existing parade are inaccurate.

They added: “Works will begin on the site immediately after it is vacated. These will involve elements such as the removal of asbestos and meters, which need to be carried out prior to demolition.

“Following the demolition works, the site will then be developed with much-needed affordable homes and a flexicare scheme providing modern homes for older people.”

To view and sign the petition search for “Save Meriden businesses and help the local community” on Change.org