A Croxley resident has been left broken after his dog Molly was stolen from a communal garden in Grove Crescent over a month ago.

Gerald McCarthy, 69, said he has felt “suicidal” since she was stolen and alongside the loss of Molly has been receiving scam ransom calls with horrendous death threats attached.

Molly the chihuahua has been missing since March 18 and the pensioner has since been desperate to get her home putting out posters asking anyone with information to get in touch.

Speaking to Gerald on Molly’s seventh birthday the pain felt by her loss was clear, describing her as his “constant companion” since his wife Brenda passed away.

He said: “It’s beyond words how I feel. I got Molly after my wife Brenda died and she has been my constant companion ever since.

“She was the reason for getting up in the morning since my wife passed away.”

In one day, Gerald received 21 scam calls threatening him to hand over a £1,000 ransom or Molly’s throat would be slit.

Gerald continued to add how hard it has been to get up in the morning and see reminders of Molly around his home, but he is refusing to give up hope.

He said: “We’ve all had dogs but we lose them in the normal ways such as old age or illness.

“I’ve still got all her bedding and toys and I get up and look at it every day.

“It would mean the world to me to get her back. I rescued her from Harefield Dog Trust when she was just three months old.” 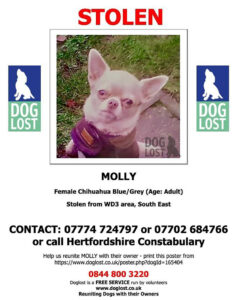