Shane O’Brien, one of the world’s most wanted men on the run for three-and-a-half years, has been found guilty of murdering 21-year-old Josh Hanson in an unprovoked attack at a bar in Eastcote.

A jury took just 55 minutes on Tuesday, 1 October to convict O’Brien, 31, who had strong links to Ruislip, following a trial at the Old Bailey.

Josh, from Kingsbury, died after his throat was slashed during a night out with friends – O’Brien then chartered a private plane to leave the country and was subject to a world-wide manhunt before finally being detained in Romania in March this year.

O’Brien had taken the police on a manhunt across Europe and was arrested in Czech Republic in February 2017 but slipped through the net.

In an unprovoked attack, O’Brien, who didn’t know Josh, slashed him with a Stanley knife across his ear, throat and chest, causing a 37cm gaping wound and catastrophic injuries. 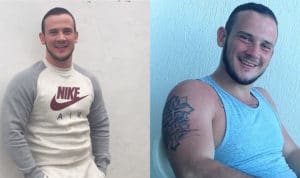 Detective chief inspector Noel McHugh, who led the homicide investigation at Specialist Crime, said: “This is the day I, and certainly Josh’s family, almost feared would never come – O’Brien finally convicted of that unprovoked and vicious attack in a bar in Eastcote close to four years ago. And we still do not have a clear answer – why?

“O’Brien is an extremely dangerous individual who murdered a young man in the prime of his life in a packed bar for no reason whatsoever.”

Tracey Hanson, Josh’s mum said: “On 11 October 2015 our lives changed forever when I received a phone call in the early hours of the morning to tell me that Josh had been stabbed in the neck.

“The aftermath of Josh’s murder has left us broken beyond repair as Josh was taken from us in the most horrific way possible, suddenly, abruptly, viciously and violently, and nothing will ever erase the CCTV footage of Josh’s final moments from our minds as he was struck with a knife so horrifically and callously, along with his suffering as he tried to fight for his life.”