A resident claimed a wall that collapsed and crumbled into hundreds of bricks onto a busy footpath near his home in Fidler Place “shook his house”.

Raymond Marskell, 48, said his wife heard the wall collapse on Friday, January 11 and believes Hertfordshire County Council would have had blood on their hands if someone was walking past when it collapsed.

Speaking to BusheyNews, Mr Marskell said: “Thankfully, nobody was on the footpath when it finally collapsed as I have no doubt this would have resulted in death or serious injury.

“This wall has concerned both my neighbours and myself for many years now and it has been reported to the local authority.

“It was leaning towards the footpath and it was a real risk.” 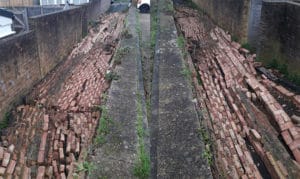 The footpath was closed shortly after it happened according to Raymond, who questioned how long it took contractors to clear the bricks.

He added: “They came out to clean it shortly after it happened and still now, on January 20, the bricks are still there. They had dragged them into two big piles but haven’t cleared them totally.”

A Hertfordshire County Council spokeswoman said: “We are aware of what happened on Friday and our contractors have been out on site to make the area safe. We are now arranging for the bricks to be removed and an assessment will then be carried out to determine next steps.”