An international animal activist was recently appalled by the “disgusting” treatment he witnessed of thousands of baby chickens outside a Bovingdon slaughterhouse recently.

Casper Hilt, from Copenhagen, visited Imran Halal Poultry on Bell Farm in Bovingdon, alongside other activists on Saturday, August 16.

Casper said he “couldn’t comprehend” how bad the conditions the baby chickens were in.

He continued: “On the day we must have seen around six trucks pull into the slaughterhouse, each carrying around 9,000 chickens and I can’t put into words how upsetting it was seeing it.

“It left me speechless. The chicks were crammed in there, they looked broken, abused, terrified and defeated. What I saw was mistreatment – they were lying there in their own urine, poo, sick and you could see the sores on their skin because of what they were lying in.”

The activists were told by one of the truck drivers that the chicks in his truck weren’t of the legal age of 42 days old. 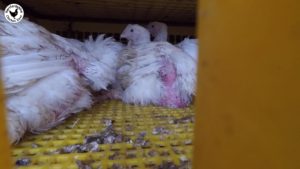 Casper added: “It just makes you think because we only saw six trucks in a normal day for the slaughterhouse – that is one day out of 365 and is one slaughterhouse out of the thousands that exist.

“I am continuously appalled at the amount of suffering I keep seeing in the food industry and people need to be aware of the treatment these animals are under.”

A video which captured the shocking conditions was posted on Facebook by Hertfordshire Chicken Save and Casper.

Casper revealed that some of the chickens were frozen in fear and had travelled from as far as Leicester in trucks and were exposed to the poor conditions and busy motorways.

Pictures courtesy of Hertfordshire Chicken Save.