> Watford FC > WATFORD FC: Why Watford have the tools needed to stay up this season

WATFORD FC: Why Watford have the tools needed to stay up this season

For Watford fans, their beloved Hornets are treating them to another season filled with various developments. Already, the club has sacked Xisco Muñoz – somewhat harshly for some – and brought in experienced Premier League-winning boss Claudio Ranieri. To supplement this, fans have had to endure a season that started fairly brightly and perhaps provided false hope, only to be brought back to down to earth with a seemingly confirmed relegation fight.

Hornets fans shouldn’t necessarily be fearing the worst, though. In fact, despite occupying the lower echelons of the Premier League table, the club has a number of encouraging signs which could help achieve top-flight survival come the end of the season. With some key fixtures on the horizon and a crucial few months ahead for Ranieri’s troops, let’s assess some positive factors which should provide some optimism for Watford’s dedicated and loyal set of fans.

Ranieri has the required experience

In Claudio Ranieri, Watford don’t just have a manager who achieved one of the greatest Premier League title wins in history, but also an experienced boss who has the know-how to get clubs out of difficult situations. Xisco Muñoz, who was adored by some sections of the support, certainly doesn’t have the same type of managerial CV as the Italian. The 70-year-old knows the Premier League inside out and understands the processes needed to navigate what is a demanding campaign, especially for a newly-promoted side. Of course, the betting odds for Premier League have Watford at 1/2 (888 Sport) for relegation, but the likes of Leeds United, who are priced at 9/2, and Burnley at 4/6, certainly aren’t out of the reckoning. Likewise, huge pressure is undoubtedly on Eddie Howe and his Newcastle United side, particularly given the recent takeover of the club and the high expectations now surrounding the Toon Army. For Watford, a key set of fixtures ahead could provide the platform needed to turn things around.

The form of Emmanuel Dennis

Currently one of the top scorers in the division, Emmanuel Dennis is the go-to man for Watford right now. The summer signing from Club Brugge has adapted to Premier League life with ease and is one of the most in-form strikers in the division. There has been some recent controversy surrounding Dennis’ Africa Cup of Nations absence, but, ultimately, Nigeria’s loss is most certainly the Hornets’ gain. Alongside Josh King, Dennis has the ability to score the goals needed to secure Watford’s Premier League survival. The Nigerian striker has a shot accuracy of 73% at the time of writing – ahead of the likes of Mohamed Salah and Jamie Vardy – which, once again, highlights his lethal touch in front of goal. Keep Dennis fit and firing, and Watford have a chance of staying up. 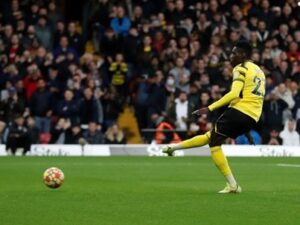 Despite being released by the club to play in the Africa Cup of Nations, the return to fitness of Ismaila Sarr after being out with knee ligament damage since November is a huge boost to Watford’s survival hopes. Senegal’s star man will hopefully return to the club looking sharp and fully fit after a long-term absence which left the Hornets in a much weaker position.

With Watford having players coming back from injury and a striker in hot form, there is cause for optimism at Vicarage Road. One look at the club’s relegation rivals will add even more hope too, with the likes of Newcastle United suffering a huge injury blow to main goal-getter Callum Wilson, while Allan Saint-Maximin’s constant injury issues won’t go away. Alongside this, the form of an inconsistent Burnley and Sean Dyche’s unusually leaky defence is a positive, as is Leeds United’s calamitous defending and rumours of a departure on the cards for star man Raphinha. It certainly isn’t over yet for Watford.