A Berkhamsted schoolgirl has won a national trophy for her impressive photography.

She was 11 when she took the photo and said it was taken at the British Wildlife Centre in Surrey.

Tamsin explained: “I wanted to take a picture of this owl because I loved its beautiful feathers and I thought that the plants behind it would make a great background. 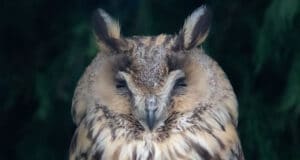 “When taking the photo, I tried to make it as sharp as possible and for there to be a clear contrast in the photo between the owl, which is the focus, and the background.”

Tamsin’s beautiful study went on to win the Herts, Beds and Bucks Rotary District Heats and eventually won the National finals for the Intermediate group.

The talented youngster was presented with her national trophy and a cheque for £250 from Berkhamsted Rotary by President John Whiteley (pictured alongside her).