> Uncategorized > Robot helps Chorleywood boy get back to school

Robot helps Chorleywood boy get back to school

A brave seven-year-old boy called Sam has leukaemia and is using a pioneering robot to help him take part in school lessons.

Sam, who is in Year 3 at The Russell School, in Chorleywood, uses the robot called AV1, which has been nicknamed ‘mini Sam’ in his classroom, because he can’t attend due to his very low immune system. 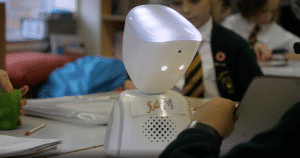 AV1 was created by Norwegian company, No Isolation, to make it possible for children and young adults with long-term illness to participate at school through an app on their phone or tablet.

A report by the BBC explained that Sam is one of the first of 90 children across the UK that is taking part in the initiative which is being funded by the Department for Education.

Sam’s mum Jude, explained how important the technology was for her son.

Talking to BBC Radio 5 Live, Jude said: “Perhaps most importantly for Sam, it’s knowing what’s going on during school without getting any germs. And just not feeling left out. Feeling like he is still part of the class and that people haven’t forgotten him.”

In the report, Sam introduces the robot by saying “I’m Sam and the robot is called mini Sam and he helps me go to school.”

Mini Sam acts as his eyes, ears, voice and arms in his lessons which is loved by his classmates and his teachers.

The impressive piece of technology sits in the classroom and live streams the lesson through to him at home through his iPad.

When Sam has a question for his teacher, he does what every other pupil does and puts his hand up. This is then transmitted to mini Sam which lights its head up to show his teacher that he has a question.

Alongside Sam learning through the robot, it also allows him to interact with his classmates.

In the report, one of his classmates said their favourite thing about the robot was it meant they were still able to work with Sam.

Another classmate added: “My favourite thing about Sam is that we can talk to him when he is at home.”

Speaking about the project with DoE, Karen Dolva, CEO and co-founder of No Isolation, said: “Our overarching goal is to end involuntary isolation, making sure that no one, irrelevant of age, gender, ability or socio-economic status, ever feels alone.”