A killer who stabbed a shopkeeper to death during a ‘one-man crime wave’ has been ordered to serve a minimum of 32 years in jail.

Alex Gunn, 31, crept up on 54-year-old Ravi Katharkamar, from Watford, from behind as he set out the Sunday newspapers at Marsh Food and Wine in Pinner, on March 24.

CCTV footage from the shop shows the killer knifing Mr Katharkamar and wrenching the cash till from his hands.

Gunn stabbed Mr Katharkamar in the heart and fled in a stolen black Vauxhall Astra as the father-of-two collapsed in the doorway.

Jurors convicted Gunn of the murder and a series of burglaries, thefts and a robbery.

The killer had visited the shop in advance to work out when the father-of-two would be most vulnerable.

Dr Puveendran Arullendran was out on a run when he stopped to look in the shop and found Mr Katharkamar bleeding on the floor with two stab wounds to his chest.

He called the emergency services and stayed with the victim, but Mr Katharkamar was pronounced dead at 6.45am. 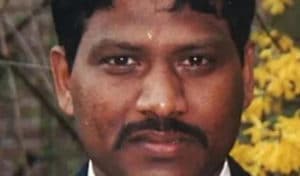 He had been stabbed twice to his chest and “the fatal wound would have been delivered with severe force.”

Gunn stole a car in Wembley 11 days before the killing on March 13.

Mr Gonsalves woke to find his house had been trashed and his camera, guitar, and car were gone.

Gunn used the car to flee the murder scene on March 24 and was still driving it at the time of his arrest.

Gunn, also from Pinner, denied but was convicted of murder, robbery, three counts of theft, four charges of burglary, and two allegations of having a blade.

The victim’s wife sat in a wheelchair in the well and sobbed as the court heard she was “haunted” by the death of her beloved spouse.

She is unable to work after suffering a car accident years ago.

Judge Angela Rafferty told Gunn: “Following release from prison, you committed a burglary at night taking personal property including a Vauxhall Astra which he drove.

“You are a drug user you committed crime to fund your habits.

“On March 24, you entered the shop you visited two earlier days. Mr Katharkamar was vulnerable, and he was alone at 6am. You were armed with a knife and you were in disguise.

“You intended at least to seriously harm him. You stabbed him with the large knife twice in the heart.

“You left him bleeding to death and alone. His wife is haunted by this. The effect will never leave her and her children. The pain for his family is unbearable.

“Your arrogance is clear to me. I consider you remorseless.”

Gunn stood in the dock wearing a black t-shirt and red and white checked scarf wrapped around his shoulders.

The arrogant killer shook his head before banging on the glass and shouting: “Don’t touch me” as security guards frogmarched him out of court.

He was sentenced to life with a minimum term of 32 years.

A GoFundMe page set up to support the family of Mr Katharkamar was set up and exceeded its £55,000 target.

Pinner resident Caron Kemp set up the GoFundMe page shortly after the incident in order to channel the community’s shock into something positive for the Katharkamar family.

“The money is held securely until the family are ready to take it. I’m liaising with them and they are obviously very grateful – but they’re also very much still in shock.”