Spring has Sprung – At Last

I’m writing this blog on a bright morning which has a distinct feeling that spring has finally sprung.

I love the lighter mornings, the longer evenings and not having to dread my heating bills land on the doorstep.

I’ve even got my bicycle out of the shed and gave it a good dusting down. This is in preparation for the training I need to take part in a London to Amsterdam charity bike ride organised by Watford FC and raising money for Prostate Cancer research.

It’s happening in June and I have extra incentives to complete the course and raise money for this charity. I was in training for last year’s event until a large unseen, pothole threw an almighty spanner in the works.

The accident left me unable to take part in the race due to a fractured shoulder, damaged ribs, cuts, bruises and dented pride.

The main motivation for me this time around is that a good friend of mine, Paul Fitzgerald, who is fighting Prostate Cancer, will be taking part as one of our team. He did this last year as well and is an inspiration. 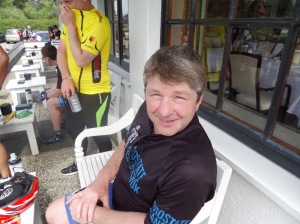 Paul Fitzgerald, an inspiration and a good friend.

I’m aiming to raise as much money as possible and part of that will be by offering a full page advert in the magazine of a person’s choice for just £99. All the money will go directly to charity.

The weekend just past brought some terrible news. Father of two and Watford fan, Nick Cruwys, was attacked after the Hornets away game at Wolverhampton Wanderers.

At the time of writing he was in a critical condition and still in a coma. Like every decent football fan I’m praying that Nick pulls through.

I will not even describe the mindless scum who attacked Nick as football fans. They’re not. These people use football as a twisted outlet for their misplaced anger and absolute thuggery.

This violent minority is shadowed by a vast majority of decent fans, who enjoy the banter but realise that’s all it is. A bit of fun linked to a game millions love.

The Wolves’ fans that started a fund to raise money for Nick shows all that’s best about the football supporting community.