A Hemel Hempstead resident became a successful celebrity make-up artist after a major health scare forced her to change her career path.

Chelsea Ruby, 27, had to leave her forensic autopsy studies after nearly dying of meningitis.

After recovering she decided to pursue a career as a make-up artist (MUA) and now, after less than two years in the industry, she has already worked with some of the UK’s biggest brands.

Chelsea’s story shows how success can quickly come for those who are dedicated to their work.

She was working in London and studying forensic autopsy when she became ill with meningitis. The lasting impact of the infection forced her to become self-employed.

It was a drastic career change for Chelsea, but within months, she was working with stars of Love Island and at the London Fashion Week. 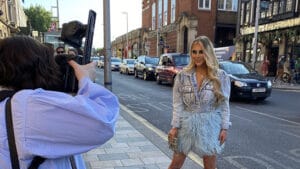 Speaking to HemelNews, she revealed: “Because of the seriousness of the meningitis and the damage it caused, I just couldn’t work 40 hours a week on my feet or on a screen. I needed to find a job where I could be self-employed.

“My whole world fell down. I felt suicidal. I had worked hard my whole life to get where I was and I was on a really good wage.

“My partner pointed out that I love make-up, so I could try that for a while.”

In September 2019, Chelsea started a course to become a certified MUA.

She added: “I now have my own salon in Hemel Hempstead, called Creative HQ. I’ve got a three-week waiting list, which is crazy considering we are just getting over a pandemic.

“I am very ballsy. I put myself out there, I emailed celebrities and celebrities’ management teams. People thought it just came to me and it was luck, but it really wasn’t.

“Now, I’m sitting on top of a team of four amazing people in the beauty industry. Sometimes you just gotta trust in this weird path of life and things will get dealt with. Things will get thrown to you, but they’re usually just thrown to people that can handle it.

“I’m classed as disabled now. I’ve got long-term spinal problems, but that doesn’t stop me from achieving.

“If you really want something, I am the firm example that you can make it happen. If you just wait for it to happen, it’s not going to.

“It’s all about skills and confidence. I am who I am and this is what I do. I don’t hide behind my health. I walk in the room, I do my job, I boss it, and I go home. No funny business, no drama.”

In March, Chelsea was named Make Up Artist of the Year at this year’s Hair and Beauty Awards, while Creative HQ was nominated as Best New Salon.

She added: “This new career makes me feel hungry. I feel strong and empowered.”