The community lost one of its most iconic figures when Northwood FC’s life president Pat Byrne tragically passed away last month.

The “irreplaceable” resident died of coronavirus on Saturday, April 25 – and while the pandemic has made it difficult for his many friends and family to properly mourn, it hasn’t deterred a staggering amount of people from paying homage to him.

“We’re talking about a proper community man – he’s widely known as Mr Northwood FC, but I would take that further and say he’s Mr Northwood himself,” said The Woods’ chairman, Ian Barry.

“It’s impossible to imagine this club, let alone this town, without him.” 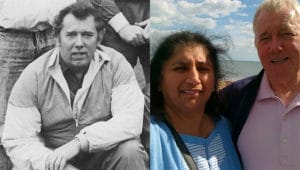 Pat, who leaves behind his beloved partner, Shamira (pictured with Pat), made his playing debut for the club in 1955, going on to make 275 appearances in a Woods shirt at different levels, and managed the team some years later; yet these roles don’t even scratch the surface of what he gave to the club.

Ian, who’s been club chairman for 13 years, said: “He was the go-to man – if you wanted anything done at all, he’d throw on his tracksuit and get it sorted for you. He was a guy who could never say no to anything – whether that was something like grabbing you a couple of pints of Guinness or something much bigger, like raising cash for what we wanted done at the ground.”

Pat didn’t restrict that above and beyond approach to football – he had the same attitude in his career at a car garage and was also heavily involved with other local clubs; he was a familiar face at Northwood Golf Club, Northwood Central Club, Northwood Town Cricket Club and Pinner Hill Golf Club.

If you visited any these clubs over the years, you’ll no doubt have heard the “true gent” telling one of his many witty, charming anecdotes.

The club are so very sad to announce that Pat Byrne, club Life President and former Woods player and manager, has this evening passed away from Covid-19.

Our sincere and heartfelt condolences go to Shamira and all Pat’s family following the loss of a wonderful man.

“He’d tell you his jokes time and time again; but you’d listen every single time and want to hear it again,” Ian recalled.

“He’d talk to you for hours – yet you’d never really hear a word about him. He was a humble man who never had any interested in talking about himself. He wanted to know how you were, how the club was going and whether you needed anything from him.”

Ian and the club were able to show Pat their appreciation before he died – first by naming a stand after him and his brothers; John, Dave, Ray and Paul, who all have lengthy history with the club; and by making Pat life president.

Ian said: “I like to think that he knew what he meant to us. He was incredibly touched by us naming the Byrne Stand and with being made life president; but I also know that there’s no actions we could take or words we could say to express just how much he really meant to us. It’s easy to call someone a legend, but Pat was just different.

“As chairman, I’m merely a custodian of the club. Pat, irreplaceably, is the club, and we’ll make sure his memory lives on.”

Here are just a few of the touching tributes that followed the news of Pat’s death:

“Such sad news. So kind, so funny, so generous and always consistently helpful to me and everyone in the Northwood FC family over many, many years. Pat was the best, shared most of my interests, was great company and I’ll miss him loads.” – Alan Evans, club secretary and treasurer.

“Pat was a remarkable man who will be so missed by so many people. Truly Mr Northwood FC with a connection going back over 65 years. The club will never be the same again without his familiar presence.” – Ken Green, Northwood FC vice president.

“Such desperately sad news. I guess I must have known Pat on and off the field for 50 years plus and can well remember the duels that HTFC had with him and his brother Paul.” – Bob Fisher, Hanwell Town FC.

“What sad, sad news. Pat, in my eyes you are and always will be ‘Mr Northwood’. I have so many great memories of you from when I was playing and hearing you from the stands and your banter after the games in the bar too!” – Gavin Hart.

“RIP, a great person who loved the football and golf clubs. Even if he didn’t have the best day on the golf course he would still be smiling, and would more than likely make up for it at the card table.” – Neil Moncur.

Pat’s funeral will take place at the Breakspear Crematorium on Friday, May 15. Only a number of close family members will be able to attend, but Northwood FC will be releasing information on how the wider community can be involved nearer the time.

To read more of the many tributes that flooded in, go to northwoodfc.com