A couple from Bushey have hit national headlines, after spending £33,000 renovating their garden as part of a new BBC Two show, Your Garden Made Perfect.

Demi and Laura Pendakis, who live in a four-bedroom property, upgraded their garden to a more inviting area they can enjoy with their three children and cocker spaniel.

Demi told BusheyNews: “It all started on a boring lockdown afternoon. I was ill with COVID and was looking out into my garden and realised that it was uninspiring. I was watching a garden TV programme and I thought, I wonder if there’s any way I can get this done up.” 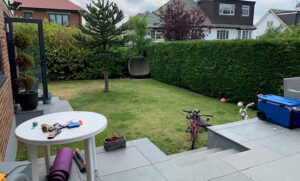 He sent off a lighthearted application to feature on a new garden show, citing lyrics from The Beatles song, Help! requesting the shows help transform the space.

The couple said the process “snowballed” and before long they had to choose which expert designer to trust with their big-budget garden renovation. Competing designers Helen Elks-Smith and Manoj Malde went head-to-head to pitch their ideas to the couple.

Demi said: “We liked both designs, which were completely different. Helen went down a more nostalgic romantic root. We chose Helen because it made more sense for us and managed the levels in the garden better.”

The couple travelled to the production headquarter in Wales last year, to view the garden designs in the latest 3D virtual reality technology.

He continued: “We were shown the designs in 3D experience, you really feel like you’re immersed in the space. It was amazing to be in an environment where everything is exactly the same proportion as you in it.”

Demi said that trying to film during lockdown whilst homeschooling three young girls was difficult and chaotic, but presenter Angela Scanlon was a bubbly character, so filming was a nice distraction.

Demi and Laura’s garden transformation was aired on February 4, but the couple has faced criticism from some viewers about the cost of the renovations. Many were also upset with the decision to cut down the beloved Monkey puzzle tree. 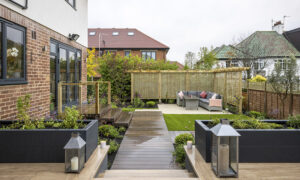 “I am shocked at the national coverage. We were very excited and surprised that we were going to be the first episode shown, so naturally, we got some of the backlash.

“I appreciate that a person’s garden is their personal space. I wanted a barbecue area because I love to entertain. Other people might not want that, but that’s just how we are.

“We absolutely adored the Monkey Tree, when we moved into the house it was small, in eight years it grew 12 meters high by eight meters across. It grew at a rapid rate and would have kept going, so the decision had to be made.”

Mr and Mrs Pendakis originally had a budget of £20-25,000, but the final cost was almost £33,000 because of structural issues found on the patio already built for the extension, which had to be addressed.

Demi explained: “One real issue was that we had a drop because of the way the land was. The garden was lower down than the house, a 70-80cm drop onto the grass, which is dangerous when you have young kids.

“I didn’t appreciate just how much things cost; I was thrown by the structural reworks. I spent three thousand pounds on plants alone! In my head that’s bonkers but what do you do when you have nothing to begin with?

“I am quite thick-skinned. I haven’t done this to please anyone else, it’s for us and our girls. Our friends, family and neighbours love it. I am absolutely delighted with the final result. I don’t think I would change anything.”

“We had some money for a holiday and decided to put towards the renovation project instead. I look at it and smile at it every day now, which is what it’s supposed to feel like.”

Laura is a chartered accountant and Demi owns a home fragrance business www.fyghome.com.

The couples garden transformation available to watch on BBC iPlayer Your Garden Made Perfect Series 1, Episode 1. The series continues Thursdays at 8pm on BBC Two.