I WANT IT ALL: Abbots boxer Shannon Courtenay says world title win is just the start

Abbots boxing star Shannon Courtenay was only crowned WBA World Female bantamweight champion earlier this month, but says she won’t be content until she wins “all the belts”.

Courtenay defeated Australian opponent Ebanie Bridges on points in a brutal fight at the Copper Box Arena in London on April 10.

In an exclusive interview with AbbotsNews, the champion said she wasn’t satisfied for even a moment.

She explained: “Don’t get me wrong: I’m ecstatic, I’m over the moon, but I’m not content, because I’m all action and I want all the belts.

“I don’t want to just win one title, I want to literally become champion of the world. I want every single world title now.

“So I’m now even more determined than I was before.”

While Courtenay, 27, can’t yet disclose what her next move is career-wise, she assured ABBOTSnews that there’s a firm plan of action.

“I’ve spoken with my manager, Adam Booth, and Eddie Hearn and we know what we’re doing,” said Courtenay. “I can’t announce anything yet, but the future looks very exciting.”

One thing that’s for certain is that the Abbots and Watford community will be behind the Baby Face Assassin every step of the way, as they have been for Courtenay’s previous eight professional bouts.

“Abbots Langley have really got behind me. There’s beautiful messages people send on Facebook and it’s so nice to know the whole village is supporting you.

“Also all of Watford, and Watford Football Club have backed me. It’s amazing to see I’ve really got the backing of my town now.

“I’ve got support nationally which is amazing, but when you’re getting support from your locals it’s just a bit more special, isn’t it? You should never forget where you come from.”

These were wise words from someone whose life has completely changed in just a couple of years.

“I went shopping yesterday and, to be honest, it was a little uncomfortable; I couldn’t really move. People kept stopping me and even with my mask on, everyone just knows who you are now.

“Parts of that are good, as it’s great to meet the fans. I guess it’s just part of the territory.”

Her latest win has already catapulted the fighter to a new level of stardom, something which hasn’t surprised Courtenay at all. 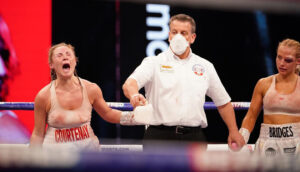 “I know the magnitude of a world title fight, and I knew that if I won it, it would literally change my entire life and it did. It has changed my life. Things are going to get more and more exciting; we’re talking about doing America now. Being able to crack America would be amazing.”

It wasn’t just the world title win that earned Courtenay plaudits, but also the manner in which she beat her opponent. Bridge left the ring with a badly swollen eye.

“Well it was a really big cut and they’re saying she could have permanent damage to her eye. It goes to show how tough a fight it was.

“People have said it was the greatest women’s fight ever and I wasn’t unscathed either – I have stitches on the inside on my head as well.

“But that’s the name of the sport. You go in there knowing full well you could get badly hurt.”

In the build-up to the fight, Bridges and Courtenay clashed over women’s boxing and how it should be perceived.

Bridges turned up to their weigh-in wearing lingerie, saying she believed that “embracing her femininity” would help bring more eyeballs to women’s boxing.

Courtenay, however, says she wants viewers “for the right reasons”.

She added: “It’s all well and good having a bit of a circus going on outside the ring to get people talking, but I want to be known for the way that I fight.

“I fight like a man – you saw that in the world title fight. I was covered in blood and there was no stopping me.