Herts Police have confirmed today (October 2) that they are carrying out enquiries into two further allegations of assault at Croxley House.

Police opened an initial investigation into the care home recently after a 95-year-old resident’s horrific injuries came to light when she was in hospital earlier this year.

Vera Harman was admitted into hospital because of a gash on her leg allegedly caused by a fall while she was at the home, but what doctors discovered from X-rays and examinations was shocking.

Doctors at the hospital revealed to Mrs Harman’s granddaughter, Georgie Lamb, that she was suffering from a broken neck bone and severe bruising which wasn’t likely to have been caused by the fall that saw her admitted into hospital. 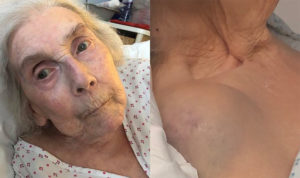 Severe bruising found on her back was believed to have occurred five days before she was admitted into hospital.

Once Mrs Harman had recovered from her injuries, she told her granddaughter that someone at the house attacked her, which is when Georgie rang the police.

Since the article in CroxleyNews’ September issue, Georgie has claimed she has spoken to five other family members of other victims of abuse whilst at the home and police have confirmed they’re investigating two other cases.

Speaking about her grandmother’s injuries, Georgie said: “She was in a bad state, she was crying, wetting herself and her injuries were so bad. Alongside the gash on her leg, doctors said she was suffering from such a severe urine infection it had turned into sepsis.

“Questions were starting to come into my head about why this hadn’t been picked up by the care home, then I found out about her other injuries and old bruising and instantly started to feel sick.

“When I told her she was going back to Croxley House, she became distressed and said, ‘What about those ones that attacked me?’”

CroxleyNews has approached Croxley House for a comment on the new information we have been provided by Herts Police.

Croxley House previously said they were co-operating full with the investigation into Mrs Harman’s allegations.