> Uncategorized > DRYING UP: River Misbourne in Chalfont is ‘in crisis and facing a fight for survival’

DRYING UP: River Misbourne in Chalfont is ‘in crisis and facing a fight for survival’

Conservationists that protect the River Misbourne in the Chalfonts are calling for a drought to be declared because the river is drying up.

Several hundreds of fish and shrimp are dead, and experts and local action groups are blaming climate change for the reduced water levels.

There are nine chalk streams in the Chilterns and they have been under threat for some time – in 2017 a similar event happened but not to the same extent.

As a designated Area of Outstanding Natural Beauty, the rivers are renowned for being gin-clear, and supporting a large diversity of wildlife.

Ecologist and environmentalist, Mike Blackmore, said: “Three rivers I’ve personally put quite a bit of work into, the Gade, Ver and Misbourne, have disappeared. This is an environmental disaster and a National scandal.”

Construction is also underway for HS2 through the villages and some believe that the works may have damaged the aquifer.

Roger Dewey, a bird watcher and conservationist said the river in the Chalfonts is completely dry.

He commented: “The River Misbourne has been totally dry at Chalfont St Peter all summer and downstream springs just about keeping the flow in Denham. My guess is that the aquifer may also have been compromised by HS2.” 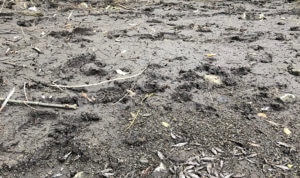 Speaking to the Independent, Chiltern Chalk Streams Project officer Allen Beechey said they have called for a drought to be declared.

He said: “Our chalk streams are in crisis and facing a fight for survival. A combination of climate change and over-abstraction to supply our ever-rising demand for water has left chalk streams like the River Misbourne in a dire state.

“These rare rivers have suffered at the hands of abstraction, which has increased significantly ever since the end of the Second World War to supply water to an ever-growing population.

“Coupled with the impacts of climate change, many of the Chilterns’ chalk streams have become progressively smaller, shorter and have dried up more and more frequently since the 1990s.

“This trend is likely to continue and our chalk streams sacrificed unless something can be done to reduce the pressure they are under.”

Bob Olden, founder of the Misbourne River Action group, added: “The Misbourne is dry for an exceptional amount of its length at the moment. It’s unusual, and possibly getting to be more frequent.”