A blind Watford teen is set to take on a challenging 400-mile bike route across the UK for this year’s BBC Children in Need.

Kelsey, 17, has joined The Rickshaw Challenge along with five other young people and The One Show’s Matt Baker.

The annual challenge, which is now in its ninth year, will start on November 8 in Holyhead, Wales and will finish eight days later in London.

The challenge has raised over £25million since 2011. 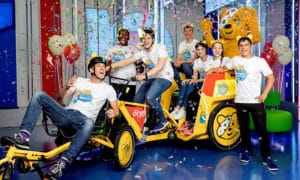 Kelsey is determined to prove to others that being blind should never be a barrier and has urged the public to get behind the team.

He said: “I’m determined to prove that being blind should never be a barrier and I’m really looking forward to being part of Team Rickshaw. I hope that the public get behind us, come out to support us on the road, and donate to BBC Children in Need.”

As a baby, Kelsey was diagnosed with bilateral retinoblastoma in his left eye which resulted in him losing his eye.

A few years later, at the age of five, Kelsey found out the cancer had returned in his right eye and despite doctors’ best efforts, they were unable to save it, leaving Kelsey blind.

Inspired by the 2012 Paralympic Games, Kelsey started playing goalball, which is funded by BBC Children in Need and delivers goalball activities and competitive opportunities for blind and partially sighted young people.

Kelsey, who has a guide dog called Lacey, and the team’s progress will be broadcast live on The One Show and will be watched by millions as they cross the finish line at BBC Elstree Studios on Friday, November 15 during the BBC Children in Need Appeal Show.

McLaren has this year created an innovative solution that enables visually impaired and blind riders to part in the challenge.

A recumbent guide-trike, which fixes to the front of the Rickshaw allows steering and braking to be managed by a guide rider whilst a visually impaired rider pedals from the main driving seat of the Rickshaw.