The managing director (MD) of Menspire salons in St Albans, Radlett and Watford has become the first ambassador of a charity set up the memory of a local teenager who took his own life.

Oliver Moorhouse (pictured), who is from St Albans, is now an ambassador for The Oli Leigh Trust, which helps various charities around the country to reduce the rates of teenage suicide and self-harm by offering training, education and support.

The charity was set up in memory of “selfless” teen Oli Leigh, who took his own life in 2018 at the age of just 16. 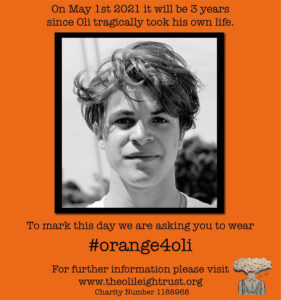 Speaking about his new role, Oliver said: “I am delighted to be supporting The Oli Leigh Trust.

“From the minute I met the team, I was inspired by their energy and determination to make a difference in helping to reduce the rate of teenage suicide and self-harm through training, education and support.

“This is a subject that profoundly resonates with me due to my own ongoing journey, so I am proud to be associated with a charity that helps with mental health and wellbeing.”

From a very young age, Oli contributed a great deal to the wider community in which he lived.

His charitable efforts included fundraising for Jewish Care, helping out in care homes with the elderly, manning phones for charitable appeals, taking part in Maccabi GB fun-runs and international games, triathlons and much more.

Oli would brighten up a room with his personality and charisma, yet his mum Michelle always said that this was a front to cover underlying insecurities.

From the tragedy of losing Oli, Michelle decided to set up The Oli Leigh Trust, with the mission of helping teenagers see through the fog and to recognise the signs of anxiety before it’s too late.

On Saturday, May 1, it will be three years since Oli took his own life.

To mark this day, The Oli Leigh Trust is launching their social media fundraising campaign, #orange4oli.

Corinne Miller, who is a volunteer for The Oli Leigh Trust, said: “Orange was Oli’s favourite colour and so the charity is reaching out to all its supporters and local community to take a picture of themselves with something orange and to tag three friends to do the same, before donating a minimum of £1 on the #orange4oli JustGiving page.”

For more information on the trust and its campaign, visit www.theolileightrust.org

And to donate, go to https://www.justgiving.com/fundraising/orange4oli