Over 600 dog walkers and users of Bushey Manor Field feel they have been “betrayed” by the trustees of the field after an ongoing battle over a ‘dog-free zone’.

Plans to create the dog-free zone across the field were proposed last year and included the building of a metal fence if they got the green light.

In response to the proposal and amidst the mixed feedback, a petition was created and was signed by over 600 people against the plans with one branding it “Bushey’s very own monstrous carbuncle.”

But in October this year, despite an apparent agreement with the trustees that any building wouldn’t take place until spring 2020, the metal fence was built. 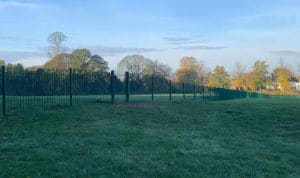 Speaking to the magazine, Robert Stone, one of the main people campaigning against the building of the fence and member of the Friends of Bushey Manor Field group, said he and others feel like they’ve been “betrayed”.

He said: “It is actually horrific what’s happened because the trustees have gone back on their word. We had an agreement with them that a ‘Virtual Fence’ would be up until spring 2020 and they haven’t.

“You can imagine quite a chunk of the community is up in arms. We feel betrayed. The idea of the ‘Virtual Fence’ was so the whole community can live together. It is a great sadness with what has happened. They couldn’t even be bothered to wait till the spring like it was agreed.”

Gillian Gray, chair of the Bushey Manor Field Trust, said the trust had decided to proceed with the fence as the trial of a ‘Virtual Fence’ which was only during the summer of 2019, wasn’t respected by some dog owners.

She said: “In 2018 the trustees made a decision to create a Picnic and Play Area by fencing off about a quarter of the field area, so that the field would be available to the whole community, not just those with dogs. A group of dog owners raised a petition to stop the partitioning of the field and proposed a ‘Virtual Fence’ which would be identified by mowing the area.

“The trustees agreed to a trial during the summer of 2019 to see if the ‘Virtual Fence’ idea would work. Signs were erected at all three gates identifying the area.

“As expected, some dog owners respected the division of the field, and some couldn’t be bothered. The trustees have therefore decided to proceed with their intention to erect a permanent fence. A hedge will be planted along the fence to soften its impact and the area will be mown during the growing season.”

A survey carried out by a member of the Friends of Bushey Manor Field from August 5 to October 27, highlights the amount of people who respected the rules of the ‘Virtual Fence’ and those that didn’t.

During the above dates, 1,938 was taken during the monitoring exercise (twice a day every day) which showed 82 per cent of users of the field were dog walkers/owners abiding by the no dogs section, six per cent chose to ignore the voluntary no dogs area and nine per cent used the facility but did not have a dog.

These statistics, according to the group, highlight the small percentage of people without a dog using the field.

What do you think? Email Charlie on newsdesk@mynewsmag.co.uk