A 72-year-old man has made it his hobby to clean road signs, completely free of charge and out of his own good will.

Ray Crawt, who lives in Sarratt was only recognised for his actions of good will when a client of his window cleaning business, took a photo to share on Facebook of him cleaning road signs.

Speaking to ChorleywoodNews, Ray said: “I don’t do it for any specific reason other than I think it’s a nice thing to do. I know the council don’t have the time to sort them, so if I don’t do them, they aren’t going to get done.

“After I’ve cleaned them, I think to myself ‘Wow, that looks much better’ and it will do for the next few years. It’s very satisfying, especially looking at the before and after pictures I take.”

Ray, who works for icleanwindows4u, loves what he does, which is why retirement is not a question he is ready to ask himself yet.

Ray said: “I know I’m an old boy, but I love my job. I’m lucky now that I can pick what jobs I’d like to do. I just do it because I want to, they can get so dirty and it looks awful.” 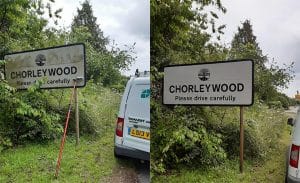 Speaking to ChorleywoodNews, Neal Parkhurst described him as a “local hero”.

Neal said: “He is a truly good old-fashioned honest guy and local hero. We could all take a leaf out of Ray’s book.”

The post went on to receive over 500 likes and racked up heaps of comments to praise the good willed citizen for his efforts.

Ray said: “It’s nice to have publicity, I didn’t realise how much impact it would have as I just do it as it’s something nice and I enjoy seeing the finished result.”

Ray’s work colleague, Jon Houghton, has also decided to follow in his footsteps and has started cleaning signs around the district.

Ray said: “Jon is such a good lad, he’s been window cleaning since he was 14 and like me, he enjoys seeing the result after a cleaning a filthy road sign, as a local business, we take pride in our villages too.”