> STANMORE MAN JAILED FOR BRANDISHING A GUN IN WATFORD

STANMORE MAN JAILED FOR BRANDISHING A GUN IN WATFORD 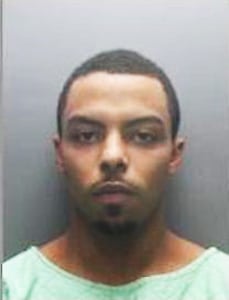 A teenager who was chased through Watford town centre by the police was carrying a gun, ammunition and cocaine.   Jordan Raeburn, 19, was jailed for a total of five years and nine months today (Thursday, May 29) after a court heard he had grown up with “serious criminality.” Raeburn, from Stanmore, had been asked to move the gun and drugs by associates of his wheelchair bound brother, who had been sentenced to 25 months at Harrow crown court for possessing Class A drugs with intent in July last year.   Prosecutor Daniel Higgins told St Albans crown court said that on November 7 last year uniformed police officers tried to stop the teenager as he walked along Watford High Street at twenty past seven at night.   He said: “When they tried to speak to him he turned and ran off at speed into Clarendon Road and then onto Beechen Grove. At the junction of Clarendon Road and Beechen Grove he turned into a service road in Charter Place that goes down to an underground area.”   Raeburn was seen to discard a distinctive blue bag before ending up in a dead end. When a police sergeant went to arrest him, the officer was knocked to the ground and suffered a graze to his elbow. After a struggle, Raeburn was tackled to the ground by the officers and was arrested.   A search was carried out and a lump of cocaine worth £600 was found. The blue bag was also discovered and found to contain 10 rounds of ammunition, two of which were live,  two mobile phones and a small amount of herbal cannabis. There was £465 in cash in Raeburn’s trousers. Mr Higgins said as police led Raeburn away he “arched himself over” in an unusual position. It caused a Browning nine millimetre pistol to fall to the ground. After his arrest, one of the mobile phones received a message that said: “If you are on the road, lay low there are Feds about.” The word Feds referred to the police, said Mr Higgins. Raeburn, of Sitwell Grove, Stanmore, appeared in court via a video link from Bedford jail. He pleaded guilty to possessing a firearm and ammunition. He also admitted possessing 6.43g of cocaine with intent to supply, possessing a small amount of cannabis, and common assault. Daniel Murray, defending, said Jordan Raeburn had grown up with “serious criminality.” He had a difficult upbringing, with his parents divorcing in 2001.  His older brother Jason, 34, had not been a good influence. The older brother had been left wheelchair-bound after being shot on 11 April 2003 and was last year jailed for drug dealing. He said his client had said that his arrest was the best thing that had happened to him. “He is sorry and hopes to turn over a new leaf. He wants to gain qualifications to improve his future. He fell in with the wrong crowd. He had been asked to move the drugs and money.” Judge Stephen Gullick told him: “If you get involved in the drug and gun culture, it is extremely serious and the courts will impose long sentences.” The judge jailed him for five years for possessing the gun and ammunition, with a consecutive eight months for the cocaine offence and another month for the assault. The £465 was forfeit and the drugs destroyed.