Two sisters from Watford have proved they are ones to watch after flourishing while representing England at an international dance competition recently.

Kristen-Leigh Petit, 10, and Kimara-Mai Petit, five, both go to Highwood Primary School in Bushey and have had a year full of medals, both nationally and internationally.

Out of the 22,000 people who auditioned for a place at the 2019 Dance World Cup, the Petit sisters performed in four categories combined and came back with a silver medal each.

Their mum, Louise Harrison, who accompanied the girls to the dance competition which was held in Portugal, said watching her girls was her proudest moment to date.

She said: “I was full of pride when I found out they got picked, but seeing them come back with medals and watching the way they performed on the weekend is quite hard to explain. It is my proudest moment to date.” 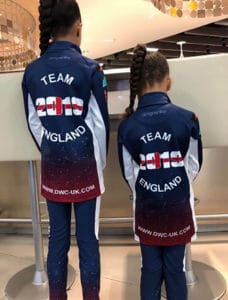 Louise, who was a professional dancer herself, said her girls love dance which they first got into when they was two years old.

She said: “They have had a really busy, but successful year. They first started it as a hobby but they now have a passion for it which you can see when they perform.”

Alongside the girls World Cup success, the sisters performed at a national competition and once again showed their talent.

Kristen-Leigh picked up the All England Champion title for her age group while Kimara-Mai picked up a silver and bronze medal in two categories in her respected age group.

The sisters also picked up a bronze medal in the Junior Character Duet where they performed together which was their mum’s favourite moment.

With their next competition coming up in October, the sisters are putting all their energy into a film which will be coming to your screens in 2020.

The girls are the youngest dancers in the film which is a take on the play Everybody’s talking about Jamie, which the girls are very excited about.

Louise believes the girls are destined for a career in the industry.