Why the London-Surrey 100 was so good 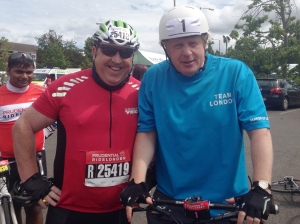 A few hours after completing the London-Surrey 100, with my limbs still aching and my brain numb from exhaustion, I signed up for next year’s race – a clear indication of just how fantastic it was.

The event, 100 miles starting at the Olympic Park, heading through leafy (and hilly) Surrey and then back into the capital for a breathtaking finish in the Mall, was the best I have ever completed, an absolutely fantastic day involving 16,500 riders, which left me with a lump in my throat.

It didn’t necessarily start out that way. I was up at 3am and down at Olympic Park at the crack of dawn. While my cycling buddy Mike Cole headed off for his 6.15am start time, I had to wait around for a few hours, nerves jangling.

Finally at 7.45am it was my turn. We had a two mile warm up, before crossing the start line, and then we were off. After months of training and prep, it was brilliant to finally get going and be riding through London without the worry of traffic lights or cars (although I witnessed a few scary crashes along the way so it wasn’t without risks).

We headed out to Hammersmith, through Kingston, Hampton Court, Richmond Park and then on to Surrey where the rolling hills really started to test me. Box Hill lived up to its reputation. The infamous 1.6 mile hill (with an average gradient of 5 per cent) is known for testing riders.

While it’s not the steepest incline, it certainly is unforgiving – it felt like it would go on forever, and the “zig zag” nature of the route meant I was never quite sure when it would end.

It did, eventually, and afterwards when I was nearing the 72 mile mark at Leatherhead I caught up with the Boris Johnson’s entourage. Boris had set off at 6.30am but judging by his attire was taking things pretty casually. It was amazing the level of attention he attracted – the crowds along the route were really vocal in their support for London’s Mayor.

When he and his group pulled into a water station I couldn’t miss the opportunity so I grabbed a quick drink and a snap with BoJo himself. He was incredibly affable and carried on talking with people as I carried on with the ride.

As a newcomer to this type of race, I experienced for the first time what serious cyclists will know all about: the benefits of “drafting” or cycling close behind someone’s rear wheel, reducing the amount of energy you expend by 20 to 30%.

It definitely did reduce my level of exertion, although I think I made up for it by concentrating even more fiercely to make sure I didn’t ride into the person in front of me. In triathlons, drafting is a serious no-no but in road races it’s fairly accepted, as long as you spend your fair share of time up front.

It was this camaraderie that really made the day and as I was making my way back into London I have to admit I felt quite emotional. Cycling along the Embankment and Trafalgar Square, with crowds roaring, was fantastic. The final 500m was up the Mall, an amazing way to finish a great day.

I finished in about 6 hours 45 minutes, picked up my medal (it’s a great whopping thing) and then spent an hour or so afterwards sitting in Green Park recovering, and reflecting.

That night I was tired, but happily not in pieces (those personal training sessions really did pay off). Mike Cole and I have already signed up to do it all again for the Peace Hospice next year.

In the shorter term, my next big ride will be the Palace to Palace in about five weeks time – a 50-miler from Buckingham Palace to Windsor Palace. Given Sunday’s success I can’t wait.