This festive season has seen hundreds of events cancelled across the country, so residents have had to find alternative ways to spread the Christmas cheer.

Residents in St Albans have spent December creating advent calendar windows up and down their street as part of the Festive Streets Campaign.

The residents in Prospect Road have been unveiling different window displays every day this month whilst raising money for a worthwhile cause. 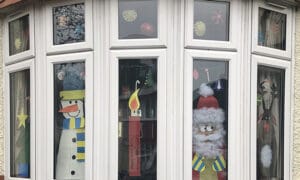 Elizabeth Hunt, a resident of the street, said that as well as adding a touch of Christmas cheer the display will help raise money for charity.

She said: “We are trying to raise money for the three charities which are St Albans Action for Homeless, Youth Talk and Open Door. We thought they were very worthy and very local causes.”

Elizabeth added that they have been creating their advent calendar for the past few years and this year were oversubscribed with houses wanting to take part.

She said: “We were oversubscribed with people who wanted to do windows so some of them have teamed up with neighbours so they can do a big window across both of the houses.”

Elizabeth also said that she hopes the window displays have helped cheer everyone up at the end of a difficult year.

She said: “Loads of people walk up and down our road so we thought it would be really fun to cheer everyone up on their daily walk or commute.

“We don’t have a fundraising target but hope to raise as much as we can, everything helps at the end of the day it will be split three ways.”

To donate head to Prospect Road and scan the QR code on lampposts along the street or donate online.