A Chalfont St Peter street’s blocked drains should be “number one priority for the council” a manager of a restaurant has said after they were overwhelmed in heavy rain causing flooding.

This is a frequent issue on Joiners Lane, according to Stefan Chira, manager at La Bodega Tapas, but the situation got out of control on October 24.

The fire brigade had to go out to clear the flooding and Stefan said he had to close the restaurant early as water was also inside. 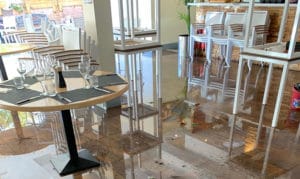 He mentioned the water was there for four days and is asking the council to resolve the issue.

Speaking to ChalfontsNews he said: “We pay so many taxes to the council, they need to do something for us. We are a small independent business if they don’t support us a little bit, with COVID-19 on top of that, we are in a really bad situation.

“We had such a bad smell because it was really dirty in front of the restaurant and no one was coming to clean it, we had to send lots of emails before they did anything.

“We even had water in the restaurant, had to close the premises and lost a lot of money. Customers obviously haven’t been happy, they understood, but you know you book at the restaurant, have plans and then having to tell them their plans are cancelled it’s not nice.”

We spoke to Roger Allen, a local photographer who was in the area when the fire brigade was clearing the flood.

He said: “There needs to be a drainage solution i.e. engineering to stop the flooding harming businesses who are struggling already in the current economic climate.

“The road drains are blocked and this is not an issue caused by the river. They need to put in bigger, better drains not unblock the same old ones.”

Many residents took to social media and complained about the issue, which has been going on for years.

One person said: “The problem is simply this. More and more housing has been put in and nothing has been spent on improving or maintaining the drainage. We have drains built in the ’70s, or before that, which are not even maintained properly.

“Bucks/Chiltern who are responsible claim it’s maintained regularly when it clearly is not. Any new build deals with drainage on the site but not the existing drainage. Thames who are responsible for the sewers claim there is no problem and do not invest.

“It’s not the river causing the problem but all the water that is not being dealt with by proper drains. Nobody takes responsibility, everyone passes the buck and businesses and individuals have to suffer. The only way to fix it is to get militant as a group.”

Another resident commented: “I’m no expert but the council do have a part to play in this and could help the situation with regular maintenance of the drains and also it’s autumn. What happens at this time of year? Loads of leaves funnily enough fall from the trees and block manholes.”

We contacted Thames Water and a spokesperson said “The team in that area aren’t aware of any specific issues with the sewer network.”

A Transport for Buckinghamshire spokesperson said: “Last week the gullies causing the immediate problem on Joiners Lane were cleared as an emergency response. The whole of Joiners Lane and the immediate area has also been scheduled for a comprehensive cleanse on the current annual Cyclic Gully Programme. This work will be completed prior to end of March 2021.”