A bereaved dad completed a 136 mile walk to his daughter’s grave in Chorleywood and surpassed the £50,000 fundraising mark just days before.

Ross Coniam, from Garston, set up the Nine4Norah campaign in honour of his daughter Norah Faith, who sadly passed away nine hours after she was born.

Ross said the getting to see Norah at the end was getting him through the tough times of his walk which took place in July.

He said: “It was very tough but got easier as the week went on – finishing at her grave was spurring me on.

“It gave me the focus because I knew I was going to see my little girl at the end and knowing she was watching over me whilst I was doing the walk was special.”

Nine4Norah saw him walk from Gloucestershire to Hertfordshire over six days and was joined by family and friends over the route.

Ross was joined by his former teacher, Bob Ford, and was surprised by two of his close friends and football mates from Sands United; a team Ross plays for which is made up of dads or brothers who have lost a child. 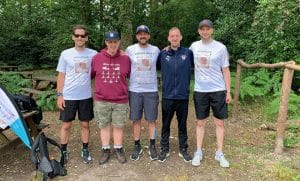 Ross commented: “It was an enjoyable walk. I had Bob with me for four of the days, a couple of my dad’s friends joined me on the Thursday and I was surprised on the Saturday which meant a lot.”

With an initial target of £6,000, Ross was blown away by surpassing £50,000 which is going to charities who helped him and his family after Norah’s death.

He commented: “We know how much they need money to help them and we also know where it is going so that makes us happy. To hi the £50,000 mark before the walk was amazing.”

On his walk, Ross was touched by the strangers who stopped and asked him about his story and donated to his page.

Out of his nine challenges, Ross still has some challenges left and is still fundraising.

His fundraising page can be found at uk.gofundme.com/nine4norah